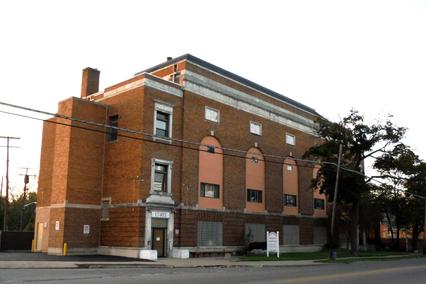 is located in Historic Old Redford,

across the street from the Redford Theater.

The Old Redford Banquet Hall offers a lighted, videoed and secured location for your event. We can think of nothing better than helping you plan and create your next event. It's a great space for corporate events, weddings, family reunions, baby showers, birthday parties, and a lot more!  We incentivize community organizations and center tenants to use the space.

The office work space creates a central hub for community advocates and local businesses. We, first and foremost, hope to strengthen inter-community relationships by encouraging collaboration of non-profits within the work space.

The versatility of the Center also allows for a wide variety of pop-ups and events, empowering local entrepreneurs and community partners.

The Old Redford Resource Center is a profitable, multi-use space that serves our community by stimulating the local economy, building capacity and promoting sustainability & communication within our neighborhoods.

The Old Redford Resource Center was first built as a Masonic Temple in 1923. It functioned as a Masonic Temple until about the mid 1970s as far as anyone in the neighborhood can remember. By the late 1980s, it had been abandoned. For about 15 years, the building was occupied by a large family of pigeons, cats, and rats, instead of being full of Masons. At that time, it was clear that the building would face one of two fates: it would either need to be revitalized or face the wrecking ball, destroying one of Detroit’s hidden gems.

The building was then acquired by a local non-profit for just $1.00. However, it would take another $1.4 Million to renovate the building and turn it into the Motor City Resource Center. The dream was for the building to serve as the headquarters for the organization along with providing office space for about a dozen other non-profits in Northwest Detroit.

After the expensive renovation process, the building changed hands once again before being turned back over to the bank.

In 2012, it was bought by local business owner, Tom O’Brien. Tom is a lifelong Detroiter and the Founder and Owner of Re-Construction, Inc. He lives in the Old Redford neighborhood where his company is based. He had long been dedicated to giving back to the community in which he lives.

Today we are proud to say that the Old Redford Community Center is back serving the community as was envisioned over two decades ago. It is open and is currently providing office space for the Detroit based nonprofit organizations TechTown Detroit and C.L.A.S.S and continues to seek local organizations with which to form mutually beneficial relationships.